Wargaming tournament happening in Auckland over Octobers Labour Weekend. Well worth entering if you're free. There will be Warhammer Fantasy and Warhammer 40K. 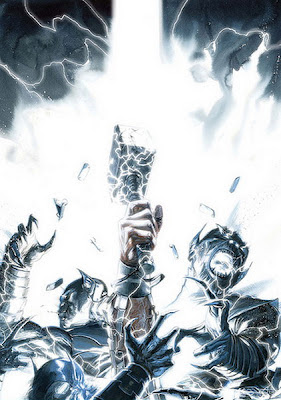 Great cause with all proceeds going to Charity and last chance to get some ranking points. Should be another fantastic tournament, see you there.
Posted by Elven Glades at 20:29 No comments:

I have my Daemon Army up for sale if anyone out there is interested. It's got:-

Give me a yell if you're interested and I can provide you with more details. Here is some samples of what is in it and I can add more pics if anyone is keen. 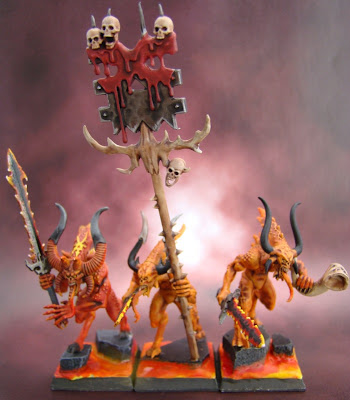 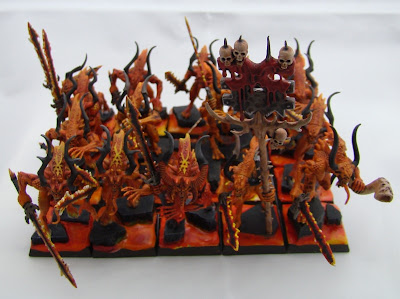 The rumours have been running around and the pictures are out for the new 6th edition 40K starter set. If there was something telling you that you should look at alternative models for your army these spoiler pics should make you raid the piggy bank for at least 3 or four of the starter sets. 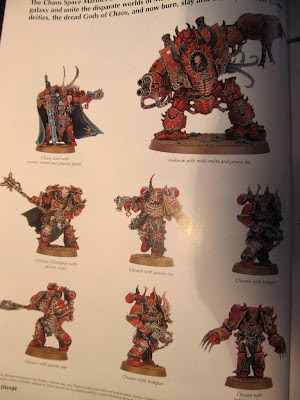 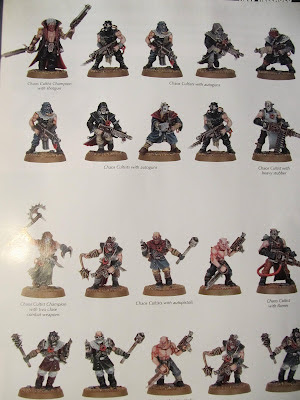 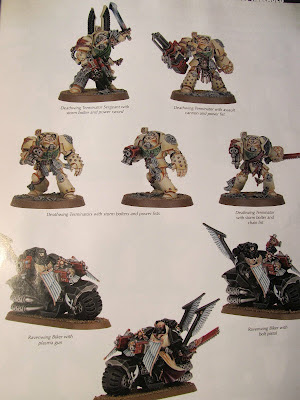 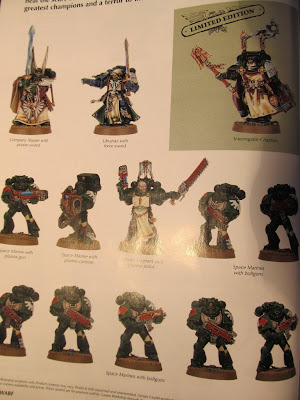 I guess Starting both forces could be a possibility...
Posted by Elven Glades at 10:30 No comments: 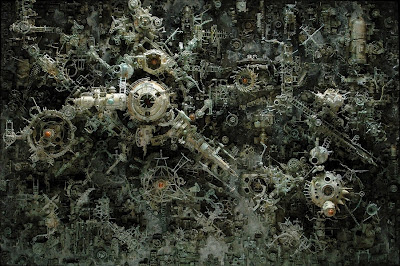 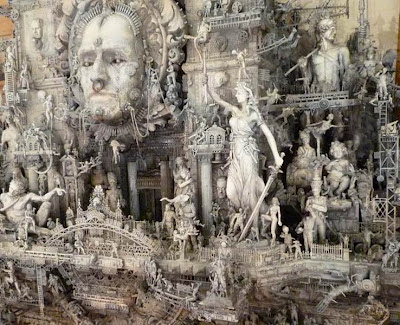 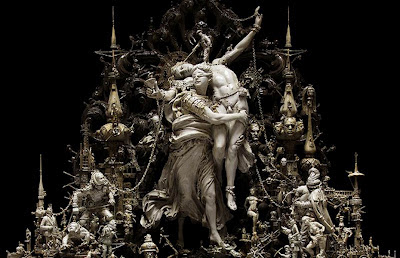 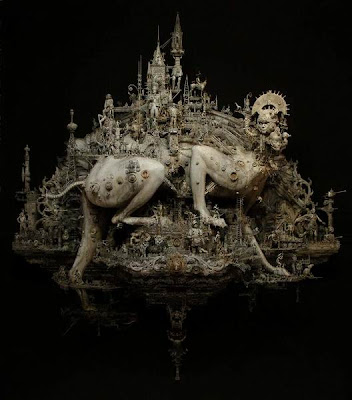 Tournament over the weekend "Tin Soldier 5". Better known as MonsterCon and it was a pretty snazzy weekend with some cool cats. Will have some Batreps and photo's up soon.
Posted by Elven Glades at 10:47 No comments:

Email ThisBlogThis!Share to TwitterShare to FacebookShare to Pinterest
Labels: Art

I've had some good luck picking up some very cool old skool models in white metal recently. Quite happy to have some of those great miniatures that has inspired my imagination and the hobby over the years in the collection. One of the latest acquisitions is Eltharion on Storm wing which I've had for years but as an incomplete model. Thanks Damian C, for hooking a brother up. 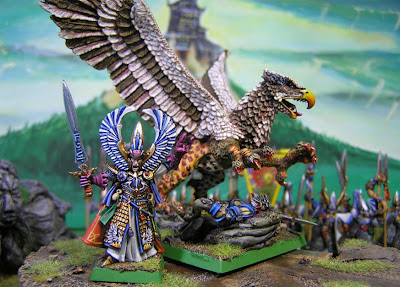 I've now even got a spare to convert to this Eltharion on foot. 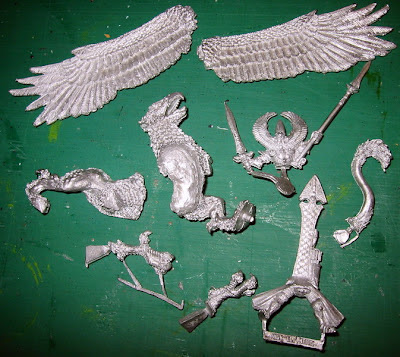 Eltharion in mint condition and still sporting the flashing. It's pretty easy to tell that my preference for Hero level miniatures is cast in metal. Games workshop have improved their technology markedly in plastics and the ease of use of plastics and price parity I wonder why they don't stay with the material for troops. The answer is economics but it won't stop this hobbyist picking up more metal collectables.
Posted by Elven Glades at 22:19 2 comments:

There has been much maligned talk surrounding the Kadai's release. Even though it has been around for almost a year it's invulnerability still surrounds it in a cloak of mythical aura. Forge worlds alacrity to create a path to a future model (there's no official model released yet) with the Dark Elf Hydra's notoriety seemed to me stopped them pausing to play test their model sufficiently. The only respite is that they did manage to make the model 300+ pts with an unstable and burning bright minor handicap. I don't dislike the model but am very cautious to recommend it as a game leveller to the otherwise middling Chaos Dwarf throng. 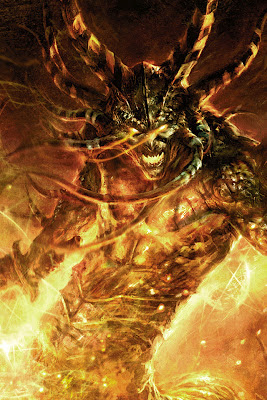 What makes the model such a paragon apart from its stats which would rival it against most Monsters in its league. Whether it be compared to a Treeman or Star Dragon, the Kadai's natural 4+ ward and 2+ fire resistance would move it one on one way above any in its class.

The rule that made people blink was its Blazing body rule which gave all non-magical attacks initially a -1 penalty to wound against it. This has been faq'd so that any wounds caused by non-magical attacks will need to be re-rolled. A contentious rule change which did little to offset its OTT invulnerability against armies with little access to magical weapons and/or majority Str 3 or 4 attacks. The change of rule does give you a slight hope of wounding it with Str3 or 4 now I suppose. Here is a graph of the percentages to be able to wound the behemoth relative to strength of attack. (Thanks to Warhammer forum) 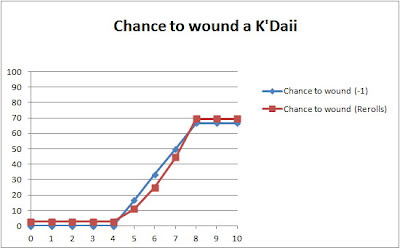 The rule change has made it much more impervious to using combo magic on the Kadai  and then attacking it. Even though it gives you a sniff at it with str 3 or 4 now, needing 6's with a re-roll. This boon will reduce the success with higher strength attacks as well as offset significantly the bell curve to wound on a lower toughness Kadai caused by magic.

How to take it down:-

At Range: Most popular and preferred choice of most armies.

1. The normal strength of 8th edition is ranked infantry to win combat.
i. Armies with monstrous infantry that can negate it's thunderstomp can take advantage of its unstable rule.
ii. Combo magic in combat by reducing it's WS to improve success in combat for your troops and negating easy hits from the Kadai. Reducing its toughness to make it easier to wound.
2. Take advantage of it's frenzy to attack it's flanks and if you're lucky a rear charge.
3. Taking advantage of it's one obvious weakness which is it's flaming attacks. Characters with protection against flaming will be effective but just remember it's thunderstomp isn't flaming.

In short shoot, shoot and magic before you go in to finish it off unless you have monstrous infantry where you can just close. My army is a little fortunate as High Elves have good access to flaming protection and magical weapons. It still caught me a little by surprise when i first faced a Kadai but then Dragon Princes come into their own against the beast.

Hope this article has helped and if anyone has a good tactic they have used against the beast please feel free to share.

Here are the painted characters I've got so far for the fast growing undead collection. Have it in mind to have a Kalida style type of list for the army which means that there will be a few archers involved. I'm still astounded at the great detail the Tomb Kings have. Quite a bit done over the week with some careful time management. 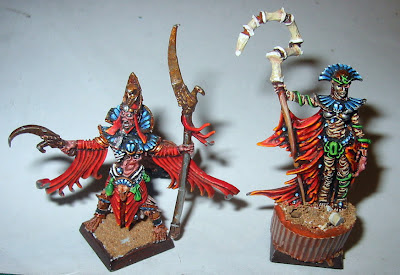 Few bits of repair work needed but a good solid base. 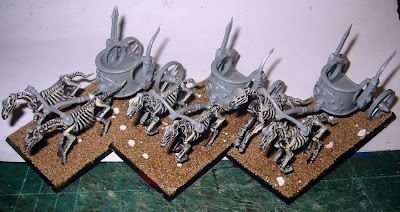 I wanted to mix it up so the Skellie horses and chariots have been repositioned. Still awaiting some tiles for the bases to match the existing bases. Trying to get some ideas for a brand or a mixture of paints to get a good sand colour, so if anyone has a good recipe please share your knowledge. 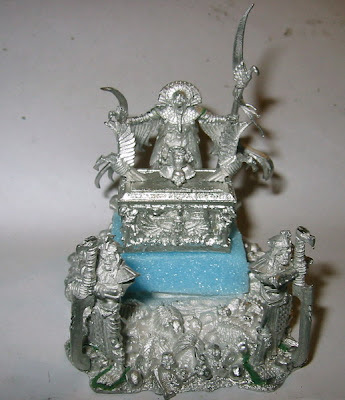 Amazing details on the Casket and it's given me inspirational ideas to sculpt my own bases of skeletal remains for future projects. Big thanks to Nikola for helping me out with the miniature (just missing the middle bit of the casket dude). It does feel good that the model is solid metal as I was facing up to getting this as a finecast... saved! 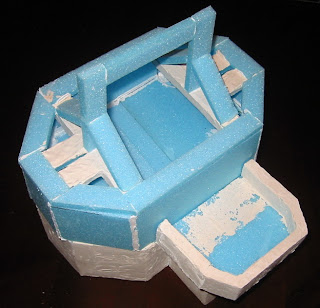 So here is the current terrain project which is taking ages but hopefully will be ultimately rewarding. Bet no one can guess what it is, hint: it's not a chilly bin. The blue styrofoam is fantastic for shaping and I can thoroughly recommend it for quick terrain building. I've used poly filler to reinforce any bits that need strength and durability. 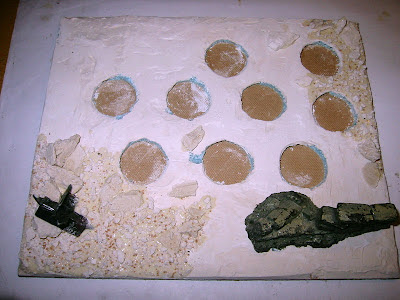 Start of my first display base for 40k and it'll have a planned command squad of Cadian Imperial Guard.

Board games of the week:

This week I got to play properly two games I had a fleeting go at a few years back. They are oldies but goodies and are really enjoyable with a group of mates, not so much with the win at all cost crowd.

Shadows over Camelot: Coop game which really takes me back to the good ol childhood sword and fantasy tales of Camelot. Plays up to 7 players who all take up roles as Knights of the round table to ward off the forces of evil and amongst the gathered heroes there is one traitor. With multiple quests to earn points for the forces of good or evil it's a great conversation game and good solid card game dynamics. 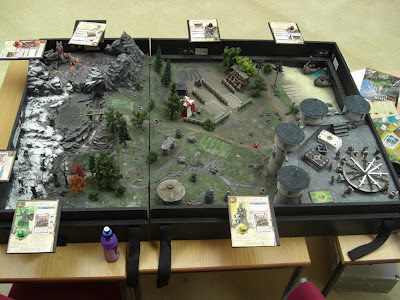 Check out this big modelled gaming board for the game. Definitely something special and if I only had the time to build. 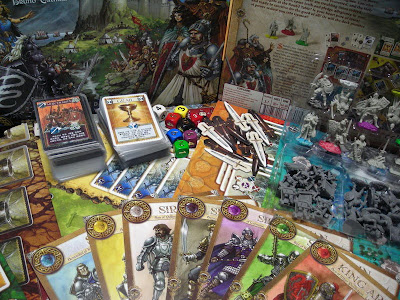 A little dated, but comes with a mass of highly detailed components which makes the game very good value. 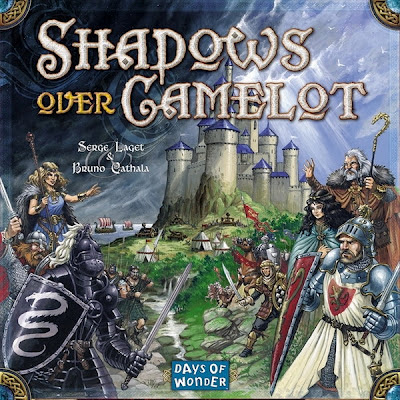 It has very universal appeal as we had a mixed table playing this game and everyone enjoyed it, so it gets 3&1/2 stars out of 5.

A perennial favourite, and has been around for a while. Good staple German economic type board games. I'm surprised that I haven't struck this game more often but I tend towards the sword and fantasy types. Great for the whole family so if you're looking around for your first few in your collection you shouldn't go past this. Really liked how it plays and we were all beginners and we were all capable after the second turn. 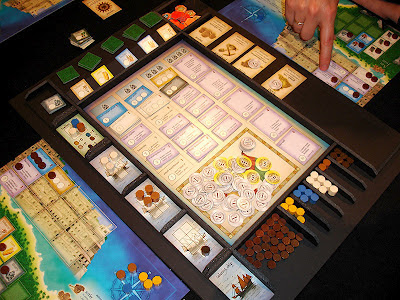 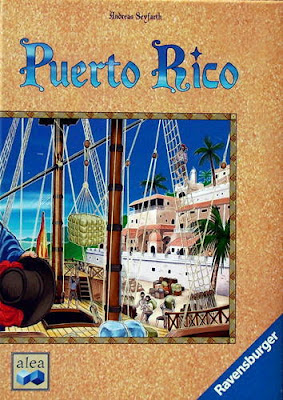