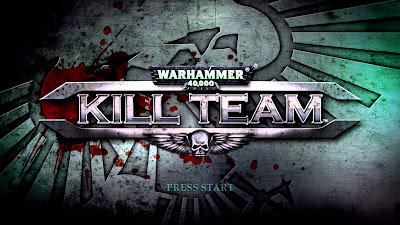 Dust off your team of veteran warriors and come and compete in the arena of Kill Teams. We will have space for 24 competitors competing on 4'x4' boards for the trophy of best 'Kill Team'.

Where & When: 9.30am Saturday with your list at the,
Rose Park Hotel.
There will be prizes and giveaways all through the day.

Composition (From the 2011 Rulebook, no adjustments)

Leader Traits & Specialist abilities will be chosen on the day.

Please get in contact for additional information.
Emails will be sent out to tournament database of players.
Posted by Elven Glades at 21:22 No comments:

Holiday weekend being celebrated over here in N.Z. We held club and was pleasantly surprised to get a great turnout for Club Sunday, what with everyone expected to be on holiday away. We had a huge range of games being played and hosted 53 gamers. Wh40k, WHFB, Mordheim, Wh40K kill teams, Board Games, X-wing and more. 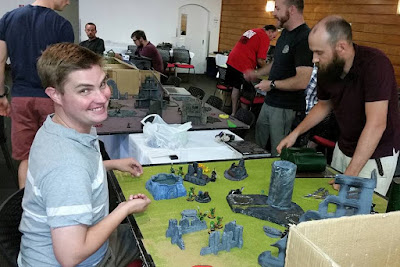 Brilliant round of Codenames 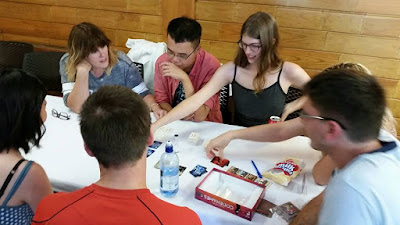 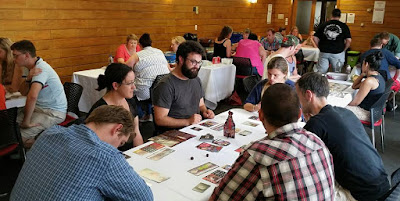 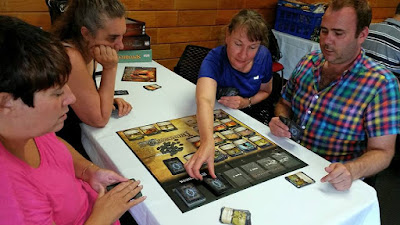 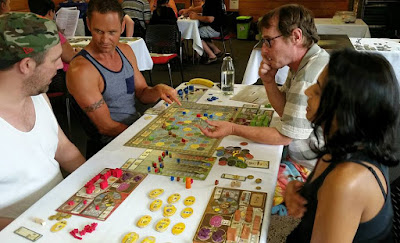 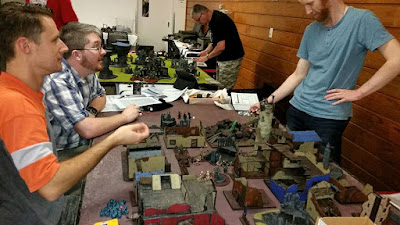 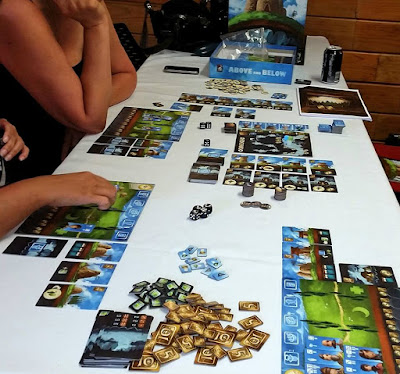 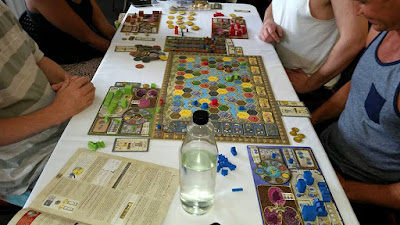 Castles of the Mad King Ludwig. 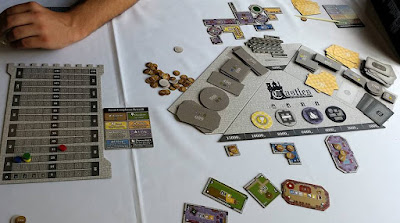 The Fury of Dracula. 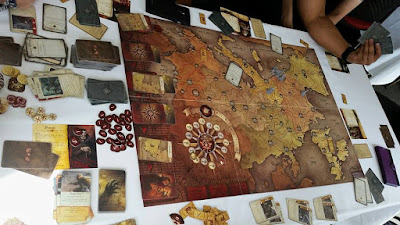 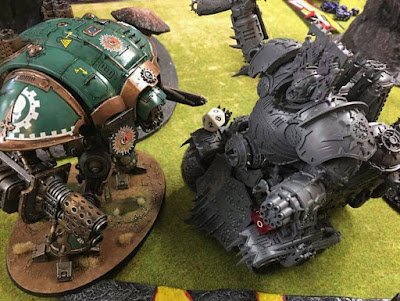 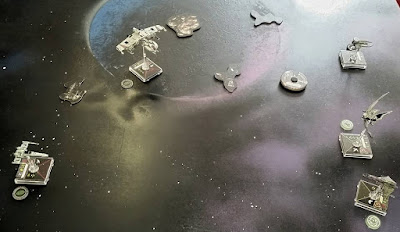 Below: The Mechanicum is about to return fire. Guarding objective 2, battle-brother Azrael can only watch as the squad's Rhino is clawed apart by a three-headed beast. Another renegade astartes falls victim to his unstable relic weapon. The mighty Salamanders advance against the savage Flesh Tearers' fire. 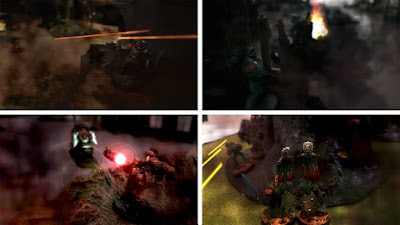 Posted by Elven Glades at 23:12 No comments:

So with version v.12 due in March, we should be rolling out tournaments in NZ proper soon.
Here's some of the events happening around the world so far. Check out the packs they are using and some of these tournaments are huge! 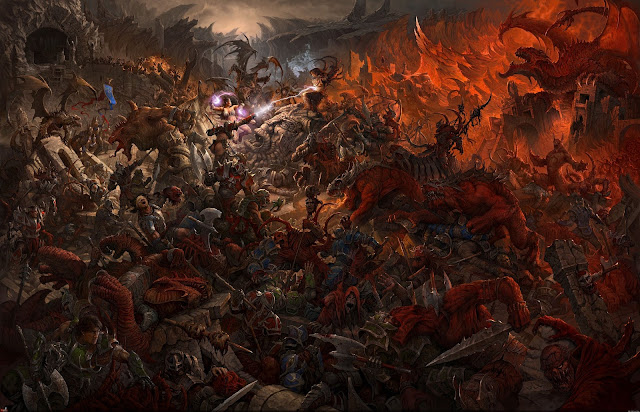 Posted by Elven Glades at 17:01 No comments:

Here's some events you might want to watch out for happening over the weekend at OTT 2016 in Hamilton. The WHFB & AOS tournaments will be run by Brian Smith and Tim Lind. The W40K event will be run by Adam Thornton. All of whom are champions of their respective hobbies over here shores in New Zealand. 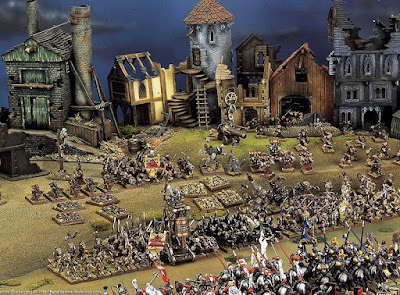 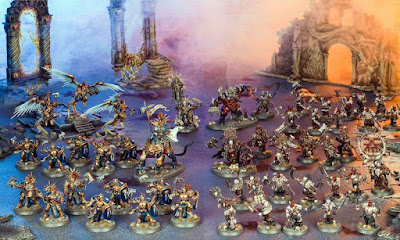 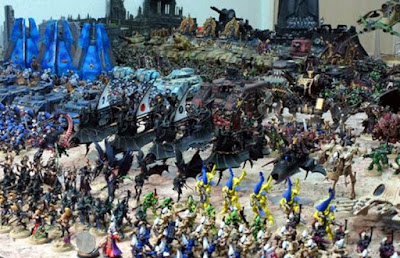 Eager to find the source of the terrible wailing, kitted out in their newly crafted gear Hannah and Orgasma, accompanied by two new brave volunteers, set out on the hunt for the Screaming Antelope. Trekking through the unending darkness, the group was suddenly overcome by a loud booming noise approaching them. Standing their ground bravely the survivors awaited whatever approached, only to spot an utterly terrifying creature pass by in the distance. The thing so terrifying that the survivors wiped their memories clean of the monstrosity and braved warily onwards. 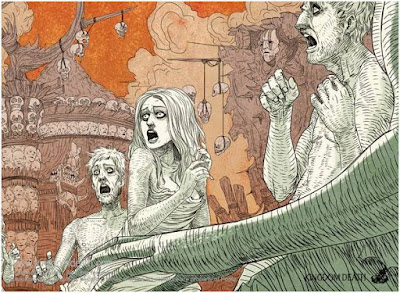 Following on the screaming antelope’s trail, the survivors eventually found a suspicious organ trail. Following it along, their fearful suspicious were met to be true. A hulking mature white lion was one step ahead of them, and had already taken down their quarry.

Our second session of Kingdom Death Monster was joined by a couple of new players, who created their own characters. We were all eager to fight the level 1 Screaming Antelope for the first time, kitted out in some pretty nice gear which we were lucky to have made plenty of due to our luck in the previous session. However our luck ran short this time. The hunt phase was a short one, as our second hunt event for the screaming antelope was met with a card that stated that our prey had already been claimed by a level 2 white lion, one which we now had to face instead of the antelope.

The survivors, shaken with fear, had no choice but to fend off this intimidating white lion that had stolen their quarry from them. The battle was a fierce one, the lion was extremely powerful and would severely injure the survivors with just a single swipe. Hannah was unlucky early on and took a powerful blow, breaking her ribs. Unable to catch her breath and move she hung back and directed the other 3 survivors, predicting it’s moves and pointing out its weak and unguarded areas. 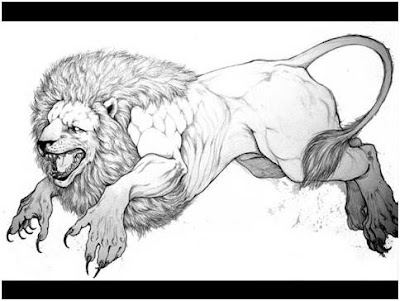 Even with this tactical advantage, the survivors faced their toughest battle yet. The lion severely wounded every survivor multiple times, their injuries slowly bleeding out over time. But the survivors would not give up, they could not let the settlement down by not bringing the food they needed to survive for the next year. With the aid of Hannah, Orgasma struck a fearsome blow which maimed the Lion’s gonads; this furiously enraged the lion. The lion, out for vengeance against Orgasma chased after him, ignoring the other survivors. However it had also taken some nasty blows during the battle, and was weakened enough that it could not keep up with Orgasma. This feat bought enough time for the other survivors to slowly wittle down the lion’s health. Down to it’s last blows, the survivors attempted to take down this fearsome opponent. Orgasma attempted to strike down the lion with his dagger, but failed to wound it. In retaliation the lion struck a fatal blow to Orgasma, striking off his leg which bled out in a geyser of blood, killing him in seconds.

In the end, only two survivors remained, Hannah and one of her new companions. Hannah with two broken ribs, and unable to move quickly. And her new companion holding onto Hannah’s shoulder, with a lost arm and leg.

Our luck ran short in this Showdown Phase. We were equipped and experienced enough to face the level 1 Screaming Antelope that we intended to fight, but were no-where near ready to fight this level 2 white lion. It was an extremely close battle, with every survivor near their last breath by the end of it. And only two of us managed to come out of the fight alive. However, utilizing our Rawhide headbands to control the lions movements somewhat, along with Orgasma managing to snatch the lion’s testicles, we managed to pull the battle in our favour and take down the lion. In the end the 2 survivors returned with a wealth of resources.

Traumatized by the fight that killed two of her companion’s the maimed and crippled survivors was struck by nightmares on her way back to the settlement. However, these dreams invigorated the settlement when she finally returned and told them of her and Hannah’s terrifying hunt.

After time had passed, and the settlement had grieved, they attempted to bring new life into the world and repopulate the settlement that had slowly dwindles over the last couple of lantern years. The maimed survivor took on a suitor. However, during childbirth she finally succumbed to her many wounds, and lost her child in the process. The second couple who attempted to procreate were far luckier however, and had a beautiful pair of twins, one male and one female.

With the first births of the settlement the survivors decided on how they would raise their children in this world; with affection. 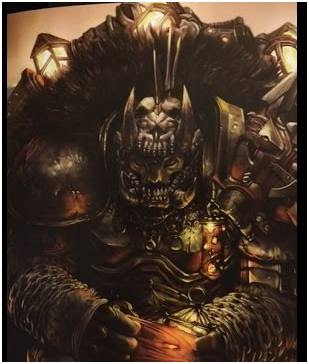 In the far distance, slow steady footsteps could be heard with the clanging of metal on metal. And with that, the third lantern of the hoard burnt out…

The settlement phase was a long one, with the wealth of new resources we had plenty of options of what to build. And with our wealth of endeavor points from the dream/storytelling settlement event we were able to attempt to repopulate our 9 strong settlement, failing the first time but being very successful the second and regaining some population to leave us at 11 strong. And with that our second session of Kingdom Death Monster came to a close!

Join us in the next session of Kingdom Death, when we face our first nemesis of the campaign – the Butcher!

That’s all for now,

Posted by Elven Glades at 17:43 No comments: